Congrats To Our Many BESTs!

The Best of Baltimore Magazine's results are in and the Highlandtown Arts District shines!

There’s a new mural in Highlandtown!

The mural is located at the corner of Eastern Avenue and Dean Street (behind the new library) and is the work of Tom Chalkley & Greg Gannon. The mural has a map concept with a bold statement of “You Are Here!” and was completed the end of October.

The concept is what Chris Ryer calls a "way-finding mural;" it displays the main through streets of the community and a handful of landmark buildings, plus cartoon characters that represent the diverse population of Highlandtown with a variety of activities -- a musician, a pizza chef, a construction worker, a yuppie on his deck, an immigrant studying, etc. This type of work, Anamorphs, has gotten a lot of recent attention because of the work of a British sidewalk artist.

There are a ton of exhibitions going on in the month of May within the district feautring local artists and artists from afar. Check out our events page for all of these exhibit's opening receptions and the links below for more information.

This Lady has the Blues - new photographs by Laura Vernon-Russell
May 3 - May 31 @ Romans Place
Features new cyanotype landscape.
Click Here For More Information

The Highlandtown Arts & Entertainment District (ha!) and UMBC are hosting the community’s first ever Pop-Up Gallery

The Highlandtown Arts & Entertainment District (ha!) and UMBC are hosting the community’s first ever Pop-Up Gallery, and we are inviting the community to pop by! The opening reception is Dec. 3rd, 5-7 pm at 401 & 403 S. Conkling St. (SE corner at Bank St.). Please join us as we celebrate this pop-up’s exhibition theme, H!ghlandtown Transfer Remix, featuring a multi-channel video installation of artwork by over 200 students from local schools, Highlandtown Elementary/Middle #215 and Hampstead Hill Academy #47.

55 guitars strumming on S. Eaton Avenue. Guitar classes, using the Suzuki Method, premiered at Highlandtown #237 this Spring. Presented by the Baltimore Talent Education Center, children as young as five years old on up to Grade 8 were welcomed to the Introduction to Guitar Classes. Students meet weekly after school. Parental involvement is strongly encouraged; most parents find themselves learning right along with their children, developing satisfying musical skills of their own. By introducing guitar, Highlandtown music teacher Jill Warzer and BTEC hope to add other instruments for classes next semester. Beyond the energy of the lessons, the Guitar classes are helping to develop a fresher approach to guitar instruction to include other cultural influences. Recent Portland transplant, guitarist and artist Jacob Elias is in charge of this curriculum shifts. www.baltimoresuzuki.com

THE BALTIMORE COMMUNTIY FOUNDATION’S NEIGHBORHOOD GRANTS PROGRAM HAS FUNDS AVAILABLE FOR GRANTS TO ASSIST COMMUNITY BASED ORGANIZATIONS AND RESIDENT DRIVEN AND LED COMMUNITY GROUPS WITH AN ACTIVE, ENGAGED RESIDENT BASE, TO DESIGN, DEVELOP AND CARRY OUT PROJECTS IN COMMUNITIES IN BALTIMORE CITY AND BALTIMORE COUNTY. MOBILIZATION & LEADERSHIP GRANTS: MAXIMUM GRANT REQUEST $5,000 COMMUNITY ARTS GRANTS: MAXIMUM GRANT REQUEST $3,500 FOR DETAILS ON EACH GRANT PROGRAM, REVIEW THE GRANT GUIDELINES AT WWW.BCF.ORG.   AN APPLICATION WORKSHOP WILL BE HELD MONDAY, MAY 6TH FROM 4-6PM. WHERE: 2 EAST READ STREET, 8TH FLOOR, LEVI CONFERENCE ROOM ·         PRE-REGISTRATION REQUIRED TO ATTEND. TO REGISTER FOR THE WORKSHOP, PLEASE EMAIL DION CARTWRIGHT AT [email protected]. WITH YOUR ORGANIZATION NAME AND THE PEOPLE ATTENDING WITH THEIR NAMES. DUE TO LIMITED SPACE, PLEASE LIMIT THE NUMBER OF PEOPLE ATTENDING PER ORGANIZATION TO 2. ·         ATTENDANCE IS NOT REQUIRED TO APPLY FOR A GRANT FROM THE NGP.

A new opportunity for the month of Feb. has been posted on Pinebox's website! We are holding a first annual Art Bazaar! All and any work accepted! Works must be for sale...no gallery commission! Deadline to apply is Feb. 1. Show opens Feb. 8th. The sooner you apply, the better wall/floor space you will get! This is a first come, first serve project, once wall space is gone the call will be closed! Visit the opportunities page for more details. www.pineboxartcenter.com/opportunities

The First EVER exhibition at PAC! Friday Jan. 11th will be more than an opening reception, it is a grand opening for something brand new to the Baltimore art community! 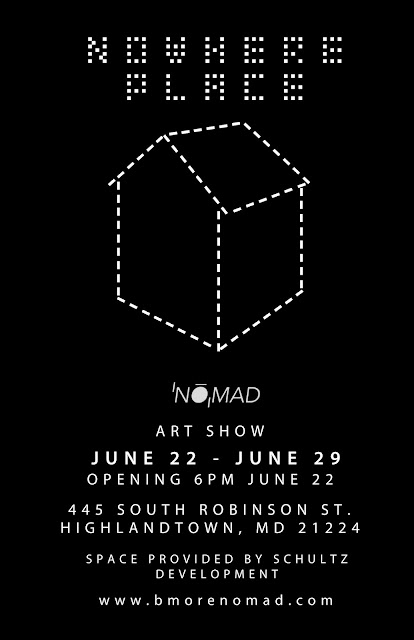 The Nomad Gallery in Conjunction with Schulz Development will be opening a new Pop up exhibit to open this Friday June 22nd at 6pm.

On any given weekday, Danielle Craven-Slaski spends her professional time at Mark Supik & Company where she paints, finishes, sculpts and casts beer taps for the family run Highlandtown company. Most notably, she sculpted the Edgar Allen Poe bust handle for local brewery Raven Beer. Danielle begun working for the company almost right after highschool, and in her time there has dabbled in woodturning. This has led her to combine her work and knitting hobby by teaching classes for creating handmade fiber art tools. She has also sculpted a miniature replica of the Frank Zappa statue for the Highlandtown Train Garden.